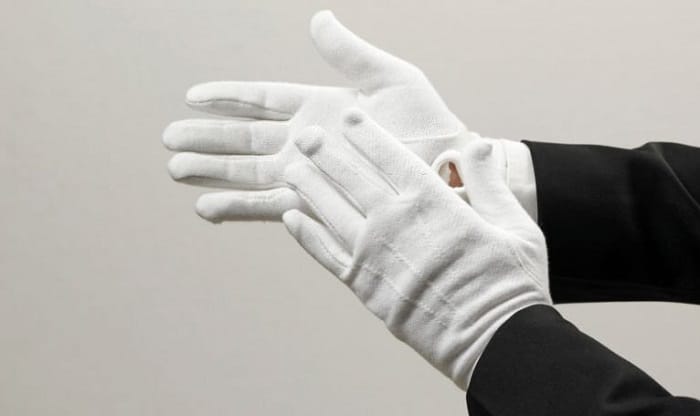 “White glove service” refers to providing help with a high level of care and attention to detail, such as shipping and packing. Even before this term was coined, this ubiquitous garment was worn by English royals, bishops, priests, and the freemason. Beyond its iconic look, it also has different meanings.

We know white to be a color that symbolizes purity and peace. But what do white gloves represent? To answer this question, let me take you back to the caves.

A Brief History of Gloves

According to this National Geographic article, cave paintings reveal that our ancestors used mittens during the Ice Age. Gloves between 1343 and 1323 B.C are said to be worn by Egyptian King Tutankhamun, presumably when he rode his chariot.

Throughout history, the design has evolved to cater to various needs. Blacksmiths protected their hands at work with heavy-duty leather gloves. In the medieval period, knights protect themselves on the battlefield along with armors and gauntlets.

Nowadays, we see the hands of Queen Elizabeth II clad in white cotton gloves as she waves to the public. Of course, she wears other colors, too. In this Good Housekeeping article, the daughter of the late royal glove maker Cornelia James, Genevieve James, says that the gloves are part of the Queen’s style. Plus, they serve as protection as she shakes hands.

If you are a Catholic, I’m sure that church officials in white hand covers are a familiar sight. Well, this article on The Educator discusses the long history of wearing white gloves in church.

As they perform their ecclesiastical functions, priests and bishops wear white linen gloves. Bishops, for instance, also have a gold plate on the back to indicate their rank. Meanwhile, priests wear white gloves, which symbolize purity.

Color psychology suggests that white signifies purity and innocence. That said, white-glove symbolism and usage differ in each culture and society.

In the case of the Freemason, the White Kid Masonic Gloves sports a logo of the group at the back. They are worn when presenting a newly-initiated candidate alongside the white apron.

This article on the Masonic Lodge of Education clarifies that there are two pairs of gloves; one for the man himself and the other for the woman, which could be his wife or his betrothed. Such practice existed in both German and French masons.

If the white apron signifies pure heart, the white gloves symbolize pure hands. Feel free to check out this video on CBS Sunday Morning to see the Freemason’s full garb. 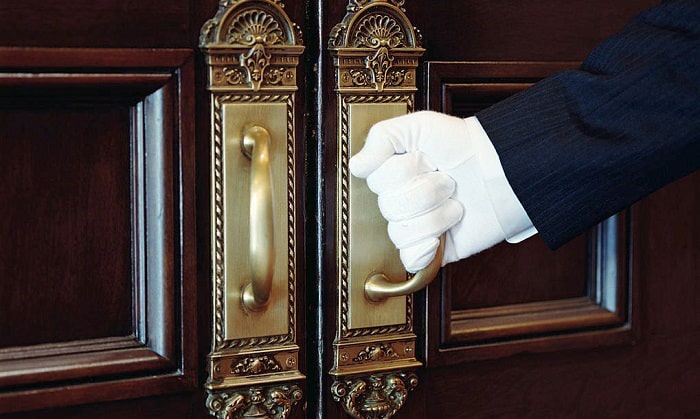 Another interesting observation is that many cartoon characters wear gloves. Before computer animation became a thing, artists have to draw each frame manually. In this interview with animation historian John Canemaker, he reveals that drawing gloves on the hand save time.

Going back to the National Geographic article that I previously linked, gloves became a status symbol in the 18th and 19th centuries in Europe and America. Wearing them protects the hands from the sun. Back then, most of the gloves were sold in white made of materials like silk, cotton, and the coveted kid goat leather.

If you recall in the introduction, I began this article by talking about the “white glove service.”

This article on Averitt Express shares that the phrase is believed to have originated from the good ol’ English butler. The butler, as we know, provides more personal attention to the job.

At any rate, it is not uncommon to see many other professionals wear white gloves. Whether it’s the hospitals, the military, or industrialized settings, workers cover their hands to prevent their hands from getting contaminated, slashed, burned, or frozen.

Indeed, white gloves meaning, as we have learned, have changed over time.

Don’t be surprised if you get different answers when you ask someone, “what do white gloves represent?” As history has shown us, the purpose and meaning of covering one’s hand in white fabric differ from various cultures and through time.

Are you thinking about wearing white gloves to jazz up your style or to protect your hands? Here are some tips to help you find the perfect white gloves: